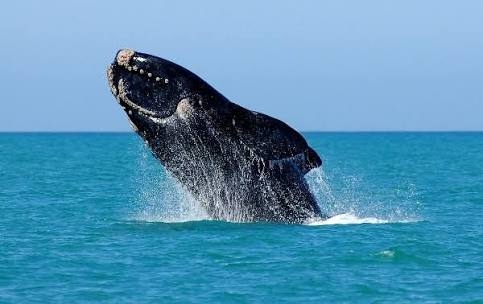 Like other right whales, the southern right whale is readily distinguished from others by the callosities on its head, a broad back without a dorsal fin, and a long arching mouth that begins above the eye. Its skin is very dark grey or black, occasionally with some white patches on the belly. The right whale's callosities appear white due to large colonies of cyamids (whale lice). Biological functions of callosities are unclear although the primal role has been considered to be for protection against predators, and whales' declines may affect on diversities and quantities of barnacles.

The southern right whale spends summer in the far Southern Ocean feeding, close to Antartica. It migrates north in winter for breeding and can be seen along the South Africa.

They are rather active on the water surface, and curious towards human vessels. One behavior unique to the southern right whale, known as tail sailing, is that of using their elevated flukes to catch the wind, remaining in the same position for considerable amount of time.

They have very strong maternal connections with locations and gene pools they were born in, and especially males may follow patterned migration routes. Calving females are known to return to their 'birth spots' at 3-years intervals as the most commonly seen calving intervals are 3 years which may vary from 2 up to 21 years due to multiple factors. Specific congregation areas in the same region may function as for different objectives for whales.

This species has been recognized to nurse unrelated orphans on occasions.

Other than sheltered and calm waters, calving grounds have been identified close to high wave coastal areas, vicinity to land cliffs and deep waters where sounds of waves may prevent predators' acoustics searches for infants and calving cows, and deep areas close to shallows may function as training grounds for calves to prepare for upcoming migrations to feeding grounds.

South Africa has become known as a mecca for whale watching, during the Southern Hemisphere winter months (June - October) the southern right whales migrate to the coastal waters of South Africa, with in excess of 100 whales known to be in the Hermanus area. Whilst in the area, the whales can be seen with their young as they come to Walker Bay to calve and mate. Many behaviors such as breaching, sailing, lobtailing, or spyhopping can be witnessed. Hermanus employs a "whale crier" to walk through the town announcing where whales have been seen.

In False Bay whales can be seen from the shore from July to October while both Plettenberg Bay and Algoa Bay are also home to the southern right whales from July to December. They can be viewed from land as well as by boat with licensed operators conducting ocean safaris throughout the year.

As it became clear that stocks were nearly depleted, right whaling was banned in 1937.